I began my journey as a ceramic artist over 40 years ago.  My formal education in ceramics began at Bakersfield College under the direction of Vic Bracke. There were others that have guided me along the way.  Clayton Rippiy, Dalene Ostercamp and Robert Mills are but a few. 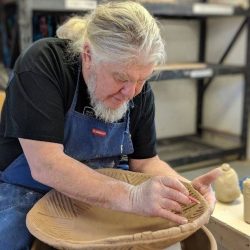 I am not a production potter.  Focusing on artistic values and attention to detail, I make each piece individually.  While my work may be described as functional but I choose to look at it from a sculptural standpoint, it’s function is at best secondary.  Primitive surface designs carved into the clay or brushed onto the surface create a very tactile a piece of art.

I work in both the high and mid temperature ranges using

My work has generated several awards and I have exhibited in solo shows as well as group and gallery exhibitions from Seattle to Southern California to Arizona.

I currently work out of my home studio in Clarkdale AZ.