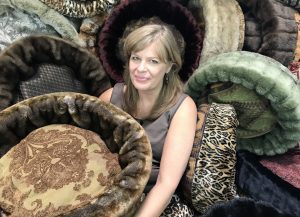 Barbara proclaimed herself a fashion designer at 5 years old while designing Barbie doll clothes. As far back as she can remember she has always loved fabric. She vividly remembers her excitement riding her bike to the fabric store miles away only to walk through the aisles of beautiful flowing fabrics, smelling the finishes, and marveling over all the trims and buttons, She remembers going with her mom to The Rag Shop in Hawthorn, NJ, with endless tables of flat folds stacked in their barely lit warehouse with giant ceiling fans trying unsuccessfully to cool everyone. She was 9 when she became an entrepreneur by making puppets or stuffed animals and selling them to her peers. She was the oddball of her family–the “outside of the box” thinker. She began sewing all of her own clothes. She hates to admit it but she’s a fabric-aholic.  It was at age 9 too that she got her first taste at modeling after being discovered by a photographer in Massachusetts at a flea market.

At 18 she began modeling in Texas and then was discovered by a modeling agency, Elle Agence, in Paris, and she embarked on her high-fashion modeling career. Barbara modeled in runway fashion shows, TV commercials, print ads, and catalogs in Paris, France, and across The United States. “It was super fun! I met countless amazing famous people like Helmut Newton, Oleg Cassini, and Lauren Hutton,” she reminisces.

By 25, Barbara was ready to sharpen her sword as a designer. She chose Parsons School of Design. She laughs, “I even walked the runway in Parsons! Every time I watch Project Runway I still have flashbacks walking it!” Barbara focused on designing knitwear and went on to win “The Future Designer of the Year Award” from the Knitting Textile Association for the creation of her unusual and beautiful knitwear. She received press on this award achievement in WWD, which attracted buyer Ellen Salzman at Saks 5th Ave for a line of high-end sweaters. 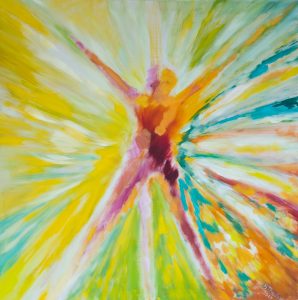 Feeling ill-prepared for the challenge, she chse to gain business knowledge by designing knitwear in New York City for Gil Aimbez, Ralph Lauren, and Cullinane. This attracted more fabulous press in WWD as well as the buyers at Lord and Taylor who loved her sweater designs.

Sadly, her mom, only 52, got cancer and passed away. The loss of her greatest fan shifted her entire life. Barbara quit her job and created her first real company–Fibertales®, “The Sweater of Your Lifetime.” She specialized in creating scenic heirloom, signed and dated, art cardigans that told a person’s life.  This earned her a mountain of press in a myriad of magazines and newspapers like The Robb Report, Hamptons Mag, Country America Mag,  Butterick Magazine and The NY Times, Bergen Record and Star Ledger. Her designs were featured in Harper’s Bizarre Mag as “Absolut® Thulin” and is in the Absolut Vodka Design Book.  Barbara also designed art sweaters she called “Treasures with a Tale.” These sold in the Collections Department in Nordstrom’s and in high-end art galleries on New England coast.  She received a first place blue ribbon for “Excellence of Craft Award” from The Montclair Craft Guild.

Her sails took a turn back to the fashion industry when she became a professional makeup artist, wardrobe stylist, and costume designer for commercial print ads, movies, TV commercials, live events, and music videos, meeting a mind-blowing variety of talented singers, actors, sports people, and politicians. She adored modeling, working with the top photographers and production houses around the world, and playing with art supplies and fabric felt like a natural direction to take. Having a wish to be a food stylist who attracted Fairytale Brownies and enjoyed food styling 50 catalogs for them earning an article in “Who’s in Charge” section of The Arizona Republic for her excellence in designing the props as well and making their brownies look absolutely delectable! 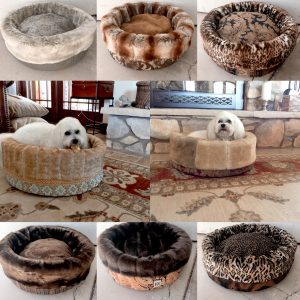 In 2004, Barbara took her skills as a designer to do something entirely new. She designed beds for her 5 cats, which ignited a fire that continues to burn today, and Decadent Digs was born.  “My heart swelled from seeing them sleep so happily on my pretty beds made with a myriad of fun fabrics! They looked like decorations on decorations! Her entire life since has been dedicated to the creation of from the heart, unique, extremely well-made, heirloom quality, fashion inspired things of beauty.

Oprah Winfrey, upon receiving one of her heart beds, exclaimed, “That’s the Prettiest Pet Bed I Have Ever Seen!” Countless people have said, “Your work is so beautiful!” One client said, “Glad you are STILL MAKING the BEST PET BEDS EVER!!” Mike Ditka’s said, “Those are some nice looking pet beds.” Others have said, “Nobody’s pet beds come close to yours.”

Her work has been featured in Neiman Marcus Scottsdale via trunk shows. Decadent Digs been featured nationally on TV shows, in magazines and newspapers such as The New York Times, Phoenix Home and Garden Magazine, Good Morning America, Modern Dog Magazine and on HGTV as well magazines and websites internationally such as The London Financial Times. She chuckles, saying, “All I do is pour my heart into making the prettiest, nicest things I can, bless them, and release them. Then somehow the press finds me.”

Forever an outside the box thinker, she dreams of unusual pet canopy beds, houses, and beds incorporating beaded dresses, wedding gowns, and oil paintings. She is greatly inspired by the couture houses such as The House of Chanel, Louis Vuitton, Valentino, Balenciaga, and Dior. Like a mad scientist, Barbara loves clustering multiple trims with fabrics to design her unique art pet pampering things. She adores the creative freedom which the press has affectionately named her “The Pet Pamperer Extraordinaire” and “The Fabric Whisperer.” 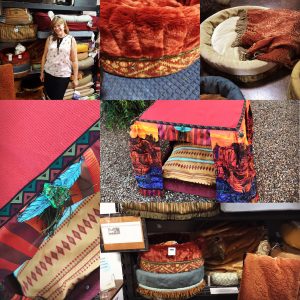 Her mantra has always been “If it’s worth doing, it’s worth doing well.” Every day Barbara strives to add extra value to everything she creates. She is grateful that many of her pieces from over a decade ago are still being used today. Most of her business is repeat customers who exclaim their joy and devotion to her! Her line of products consists of The Bodacious Bucket™ hat box style bed, Treasured Tuffet™ pillow style bed, Mobile Magnificence™ car-seat bed, Kennel Couture™ covers and beds for crates, and Stellar Stairs™ custom foam-covered pet steps. Everything is truly custom-made and made to order.

Barbara resides in Clarkdale, Arizona, with her 3 black cats, 3 gold dogs, and her awesome fiancé Michael Rasmussen. Her hobbies include sewing art pillows & mixed media art pictures, painting visionary oil paintings, photographing clouds, and creating refrigerator surprise dishes for her guy. Every Sunday she sings her heart out in the choir of Immaculate Conception, in Cottonwood, AZ. Her favorite magazines are Where Women Create and Where Women Create Business. She is a YouTube Positive Thinking and Law of Attraction junkie! “There are things that have happened to her the movies haven’t dreamed of yet,” she exclaims.  She is a beach bum at heart who adores the ocean and dreams of settling there someday.